Sorry there hasn't been any new content the past few days. I've just had quite a bit of stuff going IRL that has caused my muse to flee in panic. I've still got plenty of ideas, I just haven't been in a good enough mood to actually sit down and write, edit, design, and post them.

Also, today (Friday, October 9th, 2015) is my birthday, so I'm just going to chill, and take a little breather. To that end, I'll be posting another update on Monday with my new posting schedule, at least until I feel I'm back up to 100% writing capacity.

Again, thank you all for reading, and check back next week for new content!

Jotted down by My Wife Hates Me at 9:35 PM No comments:

My Wife Says I Have NO Sense of Style

What can I say? I'm not a very smart man, when it comes to poking the bear. Don't get me wrong, even I know there are some lines you just don't cross, but I have been known to step just a little bit too far. Making fun of her sense of style is no exception.

Being a man, my tastes are somewhat... limited. It's just something that I don't really care about. Like color coordination or fashion details. Take color, for example. What's the difference between these two: 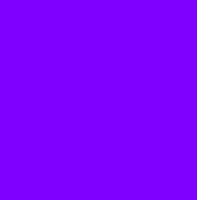 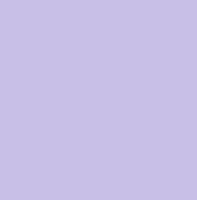 I'm not color blind, but they look that 2 shades of the same color: purple. NOPE! One is Lavender! My wife will spend hours trying to find, say, the right shade of paint to match the eggplant purple drapes. She wants cute, matchy-matchy towels in colors that rhyme... I just want to dry my hands!

Let's take furniture: I would rather have a nice pair of leather recliners. My wife wanted a big sofa. Which one do you think we got? (To be fair, I did talk her into getting a 3 piece sofa with double recliners on one end... no leather, though... or built in cooler... or vibrating seats... :( ) 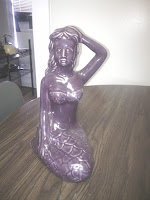 Another thing my wife is really, really into is mermaids. She has mermaid pictures, paintings, statues... you name it, if it has a mermaid on it, she'll just love it! I don't understand, at all.

Finally, there are her peacocks. No, not real peacocks. There... statues or some such. She named them... Pepsi & Cola. I kid you not! What's that all about? And, no, I DON'T KNOW which is which!

My wife is a very light sleeper. When I say light, I mean light. She will wake up if someone sneezed on the other side of town. The slightest noise can bringer her completely out of a sound slumber. She has been this way since I've known her.

I, on the other hand, sleep like the dead. More importantly, once I'm out... I'm out. You can step on my head, kick me in the gut, or beat me silly, and I won't wake up. I've been like this since I was a child.

Now, put those two together, and what do you get? One cranky bear. It ticks my wife off, to no end, that our son's whooping and hollering in the next room (because he just kicked his buddy's behind in the latest Call of Duty) will scare her half to death and I just keep laying there... snoring... I've mentioned the snoring before.

The same thing happens if, say I have to get up in the middle of the night to take care of perfectly normal bodily functions. BAMB! She bolts right up, and then growls at me for waking her up with “all that noise!” What noise? I just, literally, sat up in bed!


So, what can I do in this situation? Nothing. I try to be as quiet as I can, and hope that, when the bear awakens, it's the Koala & not the Grizzly I get!

Even I don't poke the bear when she's angry!

Jotted down by My Wife Hates Me at 1:53 PM No comments:

Talking 'Bout Movies... BEFORE They're Over

I am not usually a talker. I've always been an introvert, and my wife is an extrovert. She makes friends easily, she's a conversationalist, and she enjoys talking to people... Except during movies. Then, she wants absolute silence, so that she can enjoy the film. This is perfectly reasonable. Unfortunately, this is also when I can't shut up.


Yes, I am one of those people. Whenever we sit down, either as a couple or as a family, to watch some cinema, I'll inevitably begin examining the plot, or the characters, or the scenes in general. My wife cannot stand this. It makes her want to rip my lips off and bury them where they'll never be found again.

Honestly, I don't do it to be annoying. It's not a question, in this instance, of poking the bear. I just feel like Roger Ebert, and have an overwhelming desire to express my opinion at the movies (if you don't get that reference, it's okay. I was young once, too).

It's not as if I don't try to keep quiet; it's just that, no matter what, I'll have to start stating my opinions immediately. It doesn't matter if we're watching my kind of movie (read: chick flick), my wife's kind (read: action/drama), or my son's (read: anything newer than 2000): I will still begin breaking down the plot/story/scene before we're out of the 1st act.

If my wife had her way, I'm sure she'd super-glue my mouth shut. Know any kind that only lasts for about 2 hours?


That was a joke, people. Really. It was. Try not hurt yourselves holding that laughter in, okay?

Re-Watching that Show for the Millionth Time

We don't get cable TV. In fact, it's been almost a decade since I had a TV subscription. My family gets our entertainment from Netflix, Hulu, YouTube, or some other internet based service.

My wife has shows she likes to watch, my son has his shows, & I have mine. Unfortunately (for my wife) I rarely watch new shows. Instead, my tastes lean more towards watching older shows... over & over & over again!

Right now, for example, I've been watching The West Wing on Netflix. For about the 18th or 19th time. This drives my wife nuts. “How can you sit through that again!? I just saw you watching that same episode 3 days ago!”

I finished the series last night... and promptly started watching it again. Why? I don't know. I'll just watch it again, until I get bored, and then switch to something else.

Maybe it's a comfort thing, but, it's not like I'm re-watching shows I remember fondly from my childhood (such as Doctor Who). It's almost always contemporary shows, like The West Wing, That 70's Show, Friends, Roseanne, The IT Crowd, or M*A*S*H.

What do all of these shows have in common? I have no idea. All I know is that I've watched them all many, many times, and, to the detriment of my wife, will do so ago... and probably very, very soon.

My Wife Hates That I Can Tune Our Son Out

My son is a teenager (15, now), and, boy can he pitch a fit! I don't remember being like that when I was his age, but I'm guessing it's perfectly normal. He uses it as a tactic to get his way.

In fact, whenever he begins one of these sessions, my reaction is to tune it out. He's crying & stomping about the house in order to get his way. Sure, it can get annoying, but if you ignore it long enough, he'll eventually give up. Not so with my wife.

Our son has perfected his craft in regards to his mother over the years. He knows exactly which buttons to push to annoy her. Once he does it enough, she'll eventually give in. He uses such charming lines as:


There's much, much more, but you get the gist of it. My wife gives in, eventually, because our son knows just how much he can annoy her before she boils over. Which usually results in her getting upset with me for being able to tune him out.


Like I said, it's probably perfectly normal, teenage behavior. Therefore, just ignore it. Let him run himself down, and, when he gets tired, he'll quit.

SNORING – The Sound that Woke the Bear

Let me tell you, nothing is more cranky than a woman who doesn't get her beauty rest (not that my wife needs it, but try telling her that)!

If you think poking the bear is bad when she's awake... The Force Bear Awakens should be the title of a horror film! Why is that, you may ask? I've said before that I can sleep anywhere and through anything. My wife... not so much.

A pin drop on Saturn would wake her up. You see, I snore. Yes, shocking, I know, but it's true. I snore loudly; I snore long. Do you think my snoring wakes my wife? Yes, yes it does.


My wife wakes up, and it's growl on! The thing is, I'm usually sound asleep, but I'll hear all about it tomorrow! She gets especially grouchy in the morning (she is NOT a morning person)!

Poking the bear may be fun. My son & I may get endless enjoyment out of it, but even we know better than to do it early in the A.M.!

I should get some of these signs and put them up around our house: 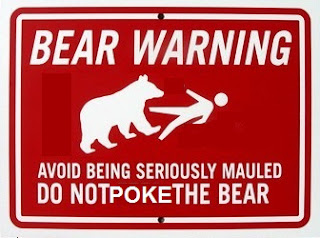 My Wife Hates Me
My Wife Hates Me! Not really, but she certainly hates my taste in a lot of things, including movies. This blog is all about that.
Older Posts Home
Subscribe to: Posts (Atom)

My Wife Hates Me

Promote Your Page Too

Help make this blog even better!